The Court is usually held 4 times a year. This is the court most ordinary people have contact with. It deals with those who had not made payments to the Lord or done their work properly, and arguments between villagers. Serious crimes are tried in the King's court in York.

The Lord's Steward is in charge of the court. We all have to attend or we are fined. 12 villeins are chosen to be the Jury. It is their job to talk to the accused and anyone else involved and then present the evidence in court and if they find the accused guilty to decide on the punishment. Henry says it a rotten job: If the Steward thinks you are being too lenient he can punish you and the accused villagers hate you if you are harsh on them. You have to live in the same village afterwards.

Punishments are usually fines or some type of public disgrace, prison is very rare.

There are no policemen to keep law and order in our village.The law says that all men in the village have to be organised into a group of ten which is called a -

The men in the tithing are supposed to make sure they all behave properly. If one of the tithing breaks the law the rest have to say who the culprit is. If they don't they will all be punished.

The Hue and Cry 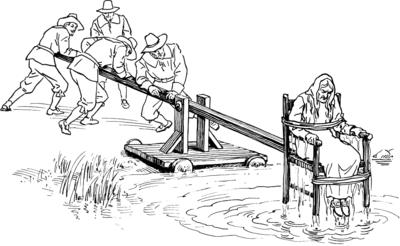 The ducking stool is mainly used as a punishment for women who disobey or constantly scold their husbands to remind them of their place. You are bound hand and foot to the stool and lowered in to the pond as many a three times. The men all laugh, but when Agnes Smart was ducked she was kept under so long that she was unconscious when they brought her up and she nearly died. The threat of it makes me think how I act. 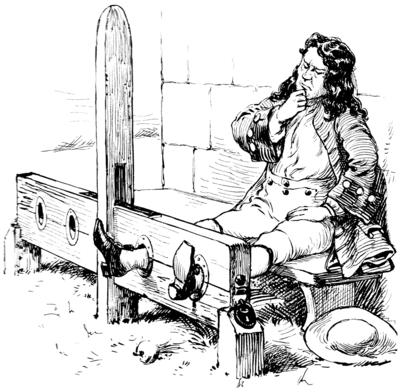 The stocks are used for disorderly behaviour. James Lighthead and Roger Strong were sentenced to 24 hours in them at the last court for being drunk and brawling in the meadow. We threw rotten fruit at them and Roger's lip was badly split.

Extracts from the Manorial Court Records

Click on the crime to discover the punishment that was given.

William Jordan, villein, for bad ploughing of the Lord's land.

(Craftsmen's wages were about 1d to 2d a day)

Alex, Gilbert and Henry badly beat Rufus after an argument about firewood.

Alex, Gilbert and Henry were all fined 6d and they had to pay 12d damages to Rufus between them.

Henry Godswein refused to do the second Boon work of the autumn.

Robert's oxen wandered into the north field and damaged the Lord's barley.

Emma called the Hue and Cry when Maud struck her but it wasn’t carried out.

Fined 2 shillings between them for not taking up the hue and cry.

Agnes, who is poor, gave birth to a child when she was not married.

Agnes She was not given a fine because she was poor.

Alice Miller for brewing weak beer and selling it before it was officially tasted.

John Lane broke his stepmother's wrist with a stick in her own house.

John Lane was put into the stocks for 24 hours.