Look across to the hill you can see squires practising swordsmanship near the castle. We see a lot of this as the Baron's castle is close to the manor. Their armour, called chain mail, is made of interlocking iron rings making it easier to move. 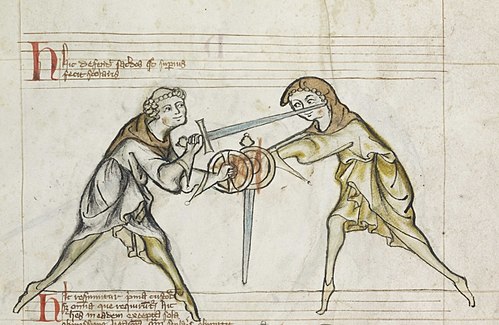 Knights are skilled horse soldiers who have been given their Manors by the Baron in return for serving in the army. Knights are trained in chivalry from about the age of 7 when they become a page, at 14 he will become a squire and continue with his education as a gentleman, learning about religion, and also learning how to fight with lance and sword. A successful squire will be knighted by the Baron or even the King in a ceremony where he swears to fight for God, his King and to be chivalrous.

One of the best things about living near the castle is that we can go to the tournaments where the knights display their skills.

Jousting is a very popular entertainment up at the castle. Knights charge at each other along opposite sides of a barrier and try to knock each other off their horse. A knight often jousted to show his love for a lady and wore her "gage", often a scarf. It's very dangerous. Several knights have been killed jousting at Percy castle.

Knights jousting at a tournament

Jousting like most medieval pastimes have a serious side too. They are ways of practising the skills they will need in battle.

Complete the text by dragging the green fields!

Every boy dreamt of becoming a knight. This, however, took years of hard work.

At the age of 7 they became a page and had to clean the stables, saddle the horses and clean the weapons.

At 14 he will become a squire. A successful squire will be knighted by the Baron or even the King in a ceremony where he swears to fight for God, his King and to be chivalrous.

Knights and squires have different rights and tasks. Sort them!

Can you do the a crossword puzzle? All the words are from unit 2!

If you click on the numbers, an input field will open!