Teenagers are a very important factor of America’s economy. They spend a large amount[1] on clothes and technology every month. 76% of US teens spend up to 4 hours at the mall each weekend. As a matter of fact there is a whole range of advertising companies which have specialized in producing adverts that attract teenagers.

One of the most used tactics to sell to a teen is to use someone they respect or idolize. In Pepsi’s advert with Britney Spears for example the message is clear: Drink this and be sexy! Other companies like Benetton decided to use incredibly shocking images – a dying AIDS victim or a newborn baby covered in blood … no actual woollen clothing! These advertisements were some of the most successful and famous ever, as people started talking about them as soon as they saw them. An advert for a children’s charity, Barnados, showing a baby taking heroine was also one of the most eye-catching and even though it was not aimed at teens, it attracted teens’ attention. The message again was clear: If kids aren’t cared for when they are young, they turn to drugs when they are older.

Persuading[2] teens not to do something can be as difficult as persuading them to do something. America’s anti-drugs campaigns failed when they explained the physical dangers to the teens. This might be because teens believe the information is dramatized or they’ve already seen so many shocking images. So the USA tried new ads that they hoped would finally prevent teens from taking drugs. They linked buying drugs to supporting terrorism. The ads showed teens saying ”If I bought drugs, I helped murder families in Columbia”. The advertisements end with a voice saying “Where do terrorists get their money? If you buy drugs some of it might come from you.” The advertisements were so shocking that many adults opposed them.

► 1. Say if these statements are true, false or not in the text.

1. US teenagers spend a lot of money when they go shopping. (true) (!false) (!not in the text)

2. The Benetton advertisements were widely discussed.(true) (!false) (!not in the text)

3. Famous stars get a lot of money, if they perform in advertisements. (!true) (!false) (not in the text)

4. America’s anti drug campaign was successful.(!true) (false) (!not in the text)

5. The teenagers don’t believe what the anti drug campaign says. (true) (!false) (!not in the text)

a. act or dance on a stage: to perform
b. The people watching a show or play: the audience
c. to be in a difficult situation: to be in trouble
d. to become successful (Klasse 6) : to achieve something
e. the arts of music, dance and drama: the performing arts

a. act or dance on a stage: to perform()
b. The people watching a show or play are the audience()
c. to be in a difficult situation: to be in trouble()
d. to become successful (Klasse 6) : to achieve() something
e. They had the opportunity/ chance() to get famous.

1. The ballet wasn't a failure, it was a success().
2. The tickets were were cheap and not expensive().
3. The girls dressed fashionably, but some of the boys had only casual() clothes.
4. The stage was really bright but the audience sat in the dark() - a good opportunity to make out. 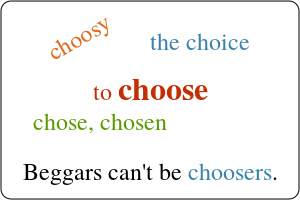 ► 4. Use drag and drop to find the right words of the same family!

► 5. Now write in the correct word of the same word family!

► 1. Put these sentences together correctly - so that these advertisement slogans make sense.

1 If a man has money it's usually a sign that he knows how to take care of it.
2 If you prefer to drive you'll find a free parking space reserved for you.
3 If all this seems like yesterday see what tomorrow could bring!
4 If you think it’s expensive think again.
5 If you should see furniture like this in a shop, it would probably cost at least twice as much!
6 If I were you, I wouldn't be satisfied with second-best.

7 If and when your six numbers come up you will share in a guaranteed minimum of $1.000.000.000 in tax-free cash!
8 Wouldn’t it be better if you had control over your payments rather than the other way round?
9 How can you meet the right person if you're not even meeting the right people?
10 If this doesn’t tempt you nothing will.
11 And if we may draw a conclusion from five generations of experience, it will be this: choose once but choose well!

Can you guess what these slogans advertise -or what sort of person they are trying to attract?

► 2. Put in the correct verb forms. Be careful: The conditional sentences are type 1 or type 2.

There's one gap in each if-sentence.

► 3. Now write in the correct verb forms. Be careful: The conditional sentences are type 1 or type 2.

1. If I were(be) you, I would buy the new product.
2. If Paluten who is really famous buys(buy) this, I'll buy it, too.
3. I would be(be) surprised if they kept their promises.
4. If dad doesn't buy(not, buy) the new product, his children won't be happy.

Choose a product that is interesting or unusual.

Make and design your ad.