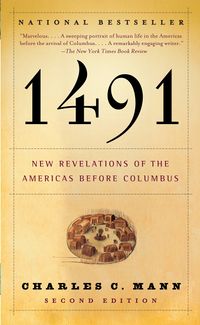 1491: New Revelations of the Americas Before Columbus is a 2005 non-fiction book by American author and science writer Charles C. Mann about the pre-Columbian Americas. It was the 2006 winner of the National Academies Communication Award for best creative work that helps the public understanding of topics in science, engineering or medicine.

A few years ago it occurred to me that my ancestor and everyone else in the colony had voluntarily enlisted in a venture that brought them to New England without food or shelter six weeks before winter. Half the 102 people on the Mayflower made it through to spring, which to me was amazing. How, I wondered, did they survive?

In his history of Plymouth Colony, Bradford provided the answer: by robbing Indian houses and graves. The Mayflower first hove to at Cape Cod. An armed company staggered out. Eventually it found a recently deserted Indian settlement. The newcomers—hungry, cold, sick—dug up graves and ransacked houses, looking for underground stashes of corn. "And sure it was God's good providence that we found this corn," Bradford wrote, "for else we know not how we should have done." (He felt uneasy about the thievery, though.) When the colonists came to Plymouth, a month later, they set up shop in another deserted Indian village. All through the coastal forest the Indians had "died on heapes, as they lay in their houses," the English trader Thomas Morton noted. "And the bones and skulls upon the severall places of their habitations made such a spectacle" that to Morton the Massachusetts woods seemed to be "a new found Golgotha"—the hill of executions in Roman Jerusalem.

To the Pilgrims' astonishment, one of the corpses they exhumed on Cape Cod had blond hair. A French ship had been wrecked there several years earlier. The Patuxet Indians imprisoned a few survivors. One of them supposedly learned enough of the local language to inform his captors that God would destroy them for their misdeeds. The Patuxet scoffed at the threat. But the Europeans carried a disease, and they bequeathed it to their jailers. The epidemic (probably of viral hepatitis, according to a study by Arthur E. Spiess, an archaeologist at the Maine Historic Preservation Commission, and Bruce D. Spiess, the director of clinical research at the Medical College of Virginia) took years to exhaust itself and may have killed 90 percent of the people in coastal New England. It made a huge difference to American history. "The good hand of God favored our beginnings," Bradford mused, by "sweeping away great multitudes of the natives ... that he might make room for us." 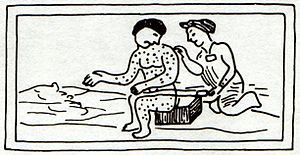 16th-century Aztec drawing of someone with measles

Measles is of zoonotic origins, having evolved from rinderpest, which infects cattle. It began causing infections in humans as early as the 4th century BC or as late as after AD 500. The first systematic description of measles, and its distinction from smallpox and chickenpox, is credited to the Persian physician Muhammad ibn Zakariya al-Razi (860–932), who published The Book of Smallpox and Measles. At the time of Razi's book, it is believed that outbreaks were still limited and that the virus was not fully adapted to humans. Sometime between AD 1100 and 1200, the measles virus fully diverged from rinderpest, becoming a distinct virus that infects humans. This agrees with the observation that measles requires a susceptible population of >500,000 to sustain an epidemic, a situation that occurred in historic times following the growth of medieval European cities.

Measles is an endemic disease, meaning it has been continually present in a community and many people develop resistance. In populations not exposed to measles, exposure to the new disease can be devastating. In 1529, a measles outbreak in Cuba killed two-thirds of those indigenous people who had previously survived smallpox. Two years later, measles was responsible for the deaths of half the population of Honduras, and it has ravaged Mexico, Central America, and the Inca civilization.
Measles#History