The ISS (International Space Station) is a spacecraft which orbits earth. It has been inhabitated since 2000 and its residents carry out experiments and space research. 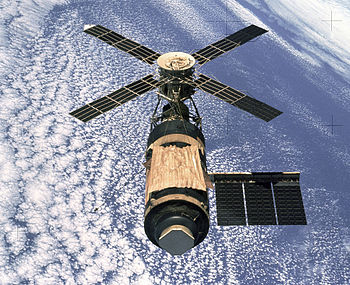 Rocket engineer Wernher von Braun and other advocates of manned space travel, expected until the 1960s that a space station would be an important early step in space exploration. Von Braun published an influential article, titled "Man Will Conquer Space Soon!". He envisioned a large, circular station 250 feet (75m) in diameter that would rotate to generate artificial gravity and require a fleet of 7,000-ton (6,500-metric ton) space shuttles for construction in orbit. The 80 men aboard the station would include astronomers operating a telescope, meteorologists to forecast the weather, and soldiers to conduct surveillance. Von Braun expected that future expeditions to the Moon and Mars would leave from the station.

The development of electronic and solar power led in the 1950s and early 1960s to unmanned satellites that could take photographs of weather patterns or enemy nuclear weapons and send them to Earth. A large station was no longer necessary for such purposes, and the United States Apollo program to send men to the Moon chose a mission mode that would not need in-orbit assembly. A smaller station that a single rocket could launch, retained value however for scientific purposes. [1]

Tick off the correct solutions. Sometimes more than one answer is right.

Scientists thought that a space station (would be the starting point of a moon landing)(could spy on other countries)(!would fly everywhere it was needed)

By spinning around, the Space Station would … (have artificial gravity)(!be able to see the earth from every window)(!move without rockets)

Skylab had a zero-gravity shower system in the work and experiment section of the Orbital Workshop designed and built at the Manned Spaceflight Center. It had a cylindrical curtain that went from floor to ceiling and a vacuum system to suck away water. The floor of the shower had foot restraints.

To bathe, the user coupled a pressurized bottle of warmed water to the shower's plumbing, then stepped inside and secured the curtain. A push-button shower nozzle was connected by a stiff hose to the top of the shower. The system was designed for about 6 pints (2.8 liters) of water per shower, the water drawn from the personal hygiene water tank. The use of both the liquid soap and water was carefully planned out, with enough soap and warm water for one shower per week per person.

The first astronaut to use the space shower was Paul J. Weitz on Skylab 2, the first manned mission.

A Skylab shower took about two and a half hours, including the time to set up the shower and dissipate used water. The procedure for operating the shower was as follows:

One of the big concerns with bathing in space was control of droplets of water so that they did not cause an electrical short by floating into the wrong area. The vacuum water system was thus integral to the shower. The vacuum fed to a centrifugal separator, filter, and collection bag to allow the system to vacuum up the fluids. Waste water was injected into a disposal bag which was in turn put in the waste tank. The material for the shower enclosure was fire-proof beta cloth wrapped around hoops of 43 inches (110 cm) diameter; the top hoop was connected to the ceiling. The shower could be collapsed to the floor when not in use. Skylab also supplied astronauts with rayon terrycloth towels which had a color-coded stitching for each crew-member.[2]

The International Space Station (ISS) is a space station, or a habitable artificial satellite, in low Earth orbit. Its first component was launched(launch) into orbit in 1998, with the first long-term residents arriving(arrive) in November 2000. It has been inhabited(inhabit) continuously since that date. The last pressurised module was fitted in 2011, and an experimental inflatable space habitat was added(add) in 2016.
The station is expected (expect) to operate until 2030.

Life aboard the ISS

Rewrite sentences 1-5 in the passive voice.

0. In 2018 NASA launched another long-term mission to the ISS.

In 2018 another long-term mission to the ISS was launched.

1.  The rocket was carrying three astronauts to the ISS.

Three astronauts were being carried() to the ISS.

2.  During the mission he carried out experiments.

Experiments were carried out() during the mission.

3. They had to use a special device to go to the bathroom.

A special device had to be used() to go to the bathroom.

The astronauts will be brought() home safely. 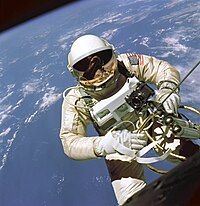