Aus ZUM-Unterrichten
< Back to the USA
Wechseln zu: Navigation, Suche

Hollywood is a neighborhood located in Los Angeles, California, that’s also synonymous with the glamour, money and power of the entertainment industry.

The first film completed in Hollywood was 1908’s The Count of Monte Cristo, although production of the film began in Chicago. The first film made entirely in Hollywood was a short film in 1910 titled In Old California. By 1911, the first movie studio appeared on Sunset Boulevard. By 1915, many major motion-picture companies had relocated to Hollywood from the East Coast.

Hollywood was an ideal place to produce movies since it had warm, predictably sunny weather and diverse terrain perfect for movie backdrops. In those times cameras needed much light. So filming inside was nearly impossible because electric lights were too big for normal rooms and produced too much heat. In Hollywood the film compies built studios with rooms who had only a floor and one or two walls! The front and the ceiling were open which was no problem in sunny Suothern California.

The Golden Age of Hollywood began with the silent movie era (though some people say it started at the end of the silent movie age). Dramatic films such as D.W. Griffith’s The Birth of a Nation (1915) and comedies such as The Kid (1921) starring Charlie Chaplin were popular nationwide. Soon, movie stars such as Chaplin, the Marx Brothers and Tallulah Bankhead were adored everywhere. With the introduction of movies with sound, Hollywood producers churned out Westerns, musicals, romantic dramas, horror films and documentaries. Studio movie stars were even more idolized, and Hollywood increased its reputation as the land of affluence and fame.

By the 1930s, at the height of Hollywood’s Golden Age, the movie industry was one of the largest businesses in the United States. Even in the depths of the Great Depression, movies were a weekly escape for many people who loved trading their struggles for a fictional, often dazzling world, if only for a couple of hours.

Who are these people? Match the professions with their corresponding definitions.

An ACTOR in an ACTION movie 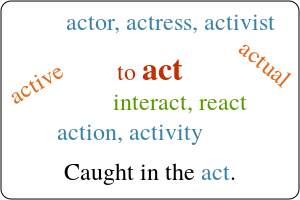 Wortfamilie "act"
Have you already acted () in a school play?

At school you can take part in many activities ().

Marilyn Monroe was the most famous actress() in the world!

Arnold Schwarzenegger was a famous actor() who played in many movies.

Next to the directors and actresses there are many people at a filming location: Stagehands bring the props to the scene.
If an action scene is too dangerous, the actor has a day off. A Stuntman takes over and jumps off a plane or a house. What you don't see is his landing on a soft cushion. In the film a fast cut shows a new scene of the actor lying on the Street and getting up again!

Back to the USA