How did the village get lost?

We are not exactly sure why Wharram Percy was abandoned but the most likely reason was the Black Death[1]. Hundreds of villages throughout England were so badly affected by the Black Death between 1348 and 1350 that either their entire population was wiped out or the few remaining survivors fled. As a result villages throughout England fell into decay.

How was the village rediscovered?

Clue 1: A church in a remote country area well away from any village. For a church to have been built there must have been a congregation close by at some time in the past.

Clue2: Local maps named three fields near the church as, Town Street, Towngate and Water Lane. This made people think that there could have been a village there at one time.

Clue 3: Documents in the county archives and even the Domesday Book (→ Open Domesday) mentioned Wharram Percy but the maps were not clear enough to locate it accurately.

In the 1940's the use of aerial photography for reconnaissance of enemy developments led to the discovery that aerial photographs could show details of what was just below the ground. This meant the foundations of buildings that had long since disappeared could be quite accurately located.

From ground level the bumps in the fields appeared to have no particular pattern but from the air the outline shapes of what appeared to be buildings and field boundaries were clear enough for archaeologists to consider it worth excavating the site to find out more. 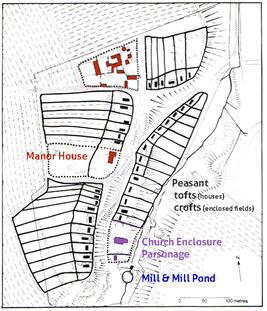 Excavation uncovered the foundations of buildings which had fallen into decay[2] during the 1300's and proved the evidence[3] of the aerial photographs to be correct. Based on this they were able to produce this map of what the village would have looked like before it was deserted and fell into decay.

Because the village was lost, Wharram Percy gives a clearer idea of the plan of a medieval village than those which exist today and have changed over the years.

Written evidence and pictures from many different Medieval sources have made it possible to add the detail about the village and its people that is given in the guided tour.

Archaeologists made some grisly discoveries: