This is our cauldron, it's made of bronze. I don't know what we would do without it. It’s nearly always over the fire. We make pottage[1], that's our main food but we are nearly always hungry, especially in winter when the food starts to run out.

You should see how they feast up at the Manor. I'll take you there later, my cousin Katie is a kitchen maid. She will show you what it's like. 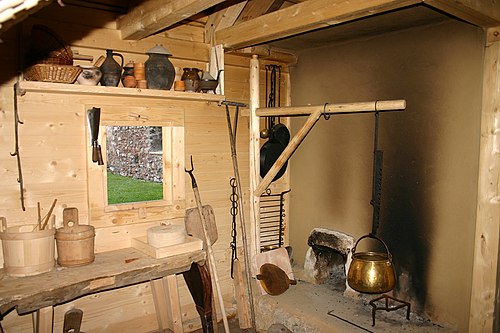 Our main food is pottage: a vegetable and herb soup cooked in the skillet, a deep pan. We have this at noon and in the evening with bread made from oats. It’s thin and watery but its warming. Sometimes I add nettles to it.

Our pig is very important. We fatten him up during the summer and slaughter him in the autumn. We salt the pork to make it keep. We only eat meat one or twice a week and it often runs out before spring and then we have to go without.

Our cow is important for milk and cheese, which I make. We keep her in the house with us during winter. In bad winters the hay runs out and we have to kill her. Then we have extra meat for a while but go hungry later. We also keep hens which give us two or three eggs each a week.

We grow a few cabbages and herbs in the cottage garden which go into the pottage. In the autumn we collect berries from the woods. We also collect our firewood in the woods. Sometimes Henry kills a pigeon or a rabbit in the woods but he has to be careful that he is not seen by the bailiff[2] as these are the Lord's property. It's the same with the fish in the river.

Our main drink is ale which is made in the village by Alice the brewer. Henry and I drink it with all our meals except breakfast, the children drink milk when we have it or water. Brewing is another of the jobs done by the women. It’s hard and dangerous work as you have to carry 12 gallon tubs of boiling liquid. Alice has been badly burnt twice. Before she can sell the ale, it has to be checked by the Lord's ale taster who fixes the price and takes some of the ale for the Lord of the Manor.

Complete the text by dragging the green fields!

Farmers grow mainly corn: Wheat and rye is used to bake bread, Barley is used to brew ale which is a kind of beer without hops. Oats can be used for porridge and as a feed for horses.

In medieval times animals were very expensive and so meat was very rare. Chicken gave eggs and the cows milk. Some of it was drunk but most was made into cheese. Cheese can be kept for months.

It was forbidden to hunt. Only the noble knights were allowed to do that.

animals and the food we get from them