Put the verbs into the gaps! (Drag & Drop)

Every morning the alarm clock rings at 7 o clock.

Then Peter takes a shower

and drinks a coffee.

After that he cleans his teeth.

Write the verbs into the gaps:

On Saturday morning my friend Robert usually sleeps (sleep) in (to sleep in =aussschlafen).

He washes (wash) his hair. Then he (have) a coffee.

After that he brushes (brush=clean) his teeth. Then he goes (go) to a friend.

When he comes home he does (do) his homework. From 4 to 5 o'clock he tidies (tidy) up his room.

In this exercise you have to choose the correct form. Write the in the gaps:

1. In the morning Lewis gets (get) up at twenty past seven.

4. The boys don't play (not, play) football. Lewis does (do) his homework. 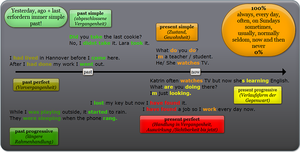