Building up a word pool/Synonyms

Write a report about your last trip to a concert.

Use the following prompts:

I was at the concert of the greatest band ever, Billy Talent’s. It was so nice, the music was very good.

At first my parents didn’t want to let me go but I made it clear to them how important it was for me. I promised them to be a good child and I have to clean the bathroom for the next two months. But I’m happy that they let me go. You should have seen me!!! I looked great. I was dressed in black and my T-shirt had Bill Talent’s name on it. I had my best shoes on.

The atmosphere was great. When the music started all the people felt like they had known each other for years. It was a feeling I had never (had) before! Everyone was happy to be there and we made a great party. It was really nice.

Something really great happened: I met three old friends with which I had done sports in the past. Daniela, Angelika und Jürgen were exactly like I had them in my mind. It was nice to talk with each other.

At the end I got an autograph of Billy Talent on my bag! That was a great evening! I would go there again.

Next time you have to come with me! 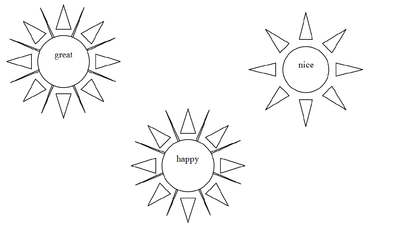 Building up a word pool