born 1903 in Bengal/India (son of a minor official)

sent to a boarding school in England, which was to prepare him for Harrow or Eton

- he worked as a teacher, married, and his wife kept a tavern and a general store - small income and little success as a writer (->"A Clergyman`s Daughter" 1935)
- he worked in a bookstore, became an active socialist and started writing about depressed industrial area (->"The Road to Wigan Pier" 1937)

1937 he joined the Republicans in the Spanish Civil War (P.O.U.M.) and was badly wounded on the front. What he saw in Spain shocked him badly and he was particularly horrified by the politics of the communists. He wrote that down in ->"Hommage to Catalonia" 1938

1950 he died of tuberculosis in London

"I belong to the Left and must work inside it, much as I hate Russian totalitarianism and its poisonous influence in this country." (Letter from November 15th, 1945)

"Every line of serious work I have written since 1936 has been written, directly or indirectly, against totalitarianism and for democratic Socialism, as I understand it." ("Why I write", 1946)

- Make a list of all animals on the farm and characterize in a few words
- Give a short summary of Major`s speech:

Describe the nature of the Rebellion (well-organized, spontaneous etc)
Comment on the >Seven Commandments<: Are they realistic?
Characterize the two leaders of the Rebellion.

“After Old Major´s death there was much secret activity on the farm during which some clever pigs worked out the principles of “animalism”. Meetings were held at night and the pigs convinced the animals of the necessity of a rebellion. Then one evening in June it happened." ... Continue

CHAPTER III: THE PIGS TAKE OVER

Harvest was a big success, almost everybody worked as hard as he could, with few exceptions: Mollie, the spoiled mare, the lazy cat, the stoic, skeptic donkey. Sunday ceremonies are introduced: hoisting of the green flag, general assemblies, planning of the week, common resolutions etc. Meetings end with common singing of the anthem >Beasts of England<. Several committees are organized, e.g. reading and writing classes, but they don`t prove very successful. Unfortunately Snowball and Napoleon are in constant opposition. Napoleon raises and educates a kennel of young dogs.

CHAPTER IV: THE BATTLE OF THE COWSHED

draw a picture of the farm and the battle (first, second and third attack) 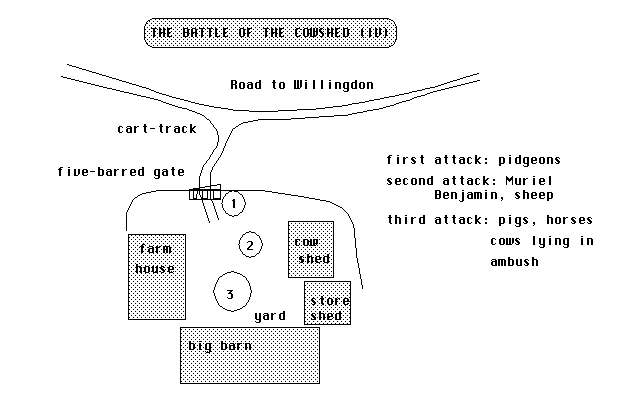 - Mollie is discovered to fraternize with the enemy and eventually disappears
- the pigs have taken over all the planning but do not agree with each other on subjects of economics, interior affairs, defence and education
- the idea of the windmill is brought up by Snowball, but Nap. opposes the plan. The whole farm is divided on the subject and a meeting is held in which Snowball`s eloquence succeeds in convincing the animals
- At this moment Nap. calls his dogs which chase S. off the farm Napoleon and his fierce dogs take over and abolish democracy
- Squealer justifies Napoleon`s coup d`etat: Snowball is a criminal!
- three weeks later Napoleon announces that the windmill shall be built

CHAPTER VI: BUILDING AND DESTRUCTION OF THE WINDMILL

- the animals work like slaves to break stones for the windmill (esp. Boxer) problems with the food suply arise
- the pigs engage in trade with the neighbouring fars (56): sale of eggs - which causes a va ge uneasiness among the animals
- the pigs establish themselves as a priviledged class and move into the farm-house and sleep in beds
- the half-built windmill is destroyed by a November-storm
- Napoleon blames Snowball for the destruction and pronounces death sentence upon him

It was a hard winter, the animals still try to rebuild the windmill. A food shortage causes serious problems and Nap. decides to sell the eggs for some grain. A hen-rebellion takes place during which nine of them die. Snowball is blamed for everything that goes wrong: Scapegoat. The history of the Battle of the Cowshed is re-written, a show-trial is arranged: Four pigs are accused of collaborating with Snowball. They confess and are killed by the dogs. Other animals confess voluntarily. After these scenes of horror and slaughter the remaining animals huddle together on the knoll outside the farm and in deep sadness sing >Beasts of England<. The song is forbidden soon afterwards and replaced by a new song composed by the party-poet Minimus.

Annotations: Between 1936 and 38 a series of show-trials was held in Russia in which almost all the high-ranking comrades confessed to the crimes they had been accused of. In 1956 Chrustschow unveiled to the XX. party congress that these confessions had been forced either by brainwashing or torture.

CHAPTER VIII: NAPOLEON THE LEADER, THE BATTLE OF THE WINDMILL

After the trials the sixth commandment is changed. Work on the farm is getting harder and food scarce. Nap. rarely shows in public, only once a fortnight in a solemn procession. He becomes detached from the other animals, is called >leader< and given a lot of glorious names.
The pigs engage in trade with the neighbouring farms. Nap. promises a pile of timber to Pilkington, but then sells it to Frederick, who has now changed from enemy into friend (Rippentrop-Pakt 1938). But Frederick cheats them with forged bank-notes. In autumn the windmill is finished, but Frederick attacks the farm with guns and explosives. The windmill is blown up. Infuriated the animals gather and counterattack, the enemy is driven off the farm but many animals are wounded or dead. Funerals and celebrations follow. The pigs discover whiskey in the cellars of the farmhouse and they all get drunk. After recovering from the hangover Nap. engages in the production of whiskey. "No animal shall drink alcohol to excess."(5th Commandment)

The animals start rebuilding the windmill and Boxer, although with great pain,works as hard as before. He wants to complete the mill before his retirement. During the winter food is rationed several times, but not for the pigs. 31 new pigs are born and instructed by Nap himself. They are not allowed to mix with the other animals` youngsters. To make the animals forget the hardships of everyday life, spontaneous demonstrations are held every week. Animal Farm is proclaimed a republic with Nap as president. Moses, the raven, reappears on the farm, preaching about sugarcandy mountain. Many believe him. Shortly before his 12th birthday Boxer breaks down. The pigs promise to send him to the hospital, but is transported to the butcher instead. Three days later Squealer tells that Boxer has died peacefully in hospital in spite of all the care and medicine. The pigs hold a memorial banquet with a lot of whiskey.

Years passed, some animals have died and few remember the beginnings. The farm has become prosperous, the windmill is completed and another one about to be built - but the animals themselves didn`t grow richer. The pigs form a separate class in charge of the administration doing mainly paper-work. The animals never lost hope and although life was hard they felt privileged to live on Animal Farm. One day they see a pig walking on two feet, more pigs follow and finally Napoleon with a whip in his trotters. Before the animals can protest the sheep - trained by Squealer - start bleating in chorus: Four legs good, two legs better. The last Commandment had been altered. The pigs gradually change into human beings, even wearing Jones`s clothes.
A delegation of the neighbouring farms turns up and a party is arranged in the farmhouse, secretly watched by the animals. Speeches are delivered in praise of the good understanding between the pigs and the human beings. Napoleon states that Animal Farm will from now on be called Manor Farm again. The animals discover that the difference between the pig-faces and the men-faces has vanished.

In spite of all the animals, this novel is not about animals in the first place, it is about... (intentions)

The author´s intention is to show that/how/why ... (message)
In my opinion he succeeded quite well/not at all/ only partly ... (evaluation)